The 100 Wiki is a site dedicated to the television series The 100.
Home to 19 articles.

The surviving The 100 attempt to escape from the incoming attack. However, when one of their own is killed by Grounder scouts, they are forced to hunker down in their fortified camp. Clarke tries to save a dying Raven, while preparing for battle. Bellamy is forced to make a difficult decision regarding Octavia. Jasper races against time to save them all and Finn makes a bold and dangerous move. Meanwhile, the remaining 1,000 citizens of the Ark prepare to return to Earth. 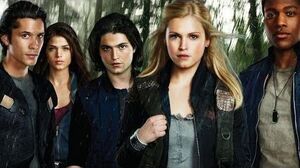 "The mountain has cast a shadow over these woods for too long. They've hunted us, controlled us, turned us into monsters. That ends today."
—Lexa[src]

Community content is available under CC-BY-SA unless otherwise noted.
Advertisement